Goðafoss, the Waterfall of the Gods, is found just off the ring road near Akureyri. Although this makes it an easy stop for tour buses, don’t let the threat of crowds keep you away from one of northern Iceland’s most impressive natural sights.

Goðafoss picked up its name in the year 1000, after Iceland converted to Christianity. To demonstrate his adherence to the new faith, a local chieftain named Þorgeir Ljósvetningagoði carried his pagan idols to the top of the waterfall and threw them into the churning void below. A bold break with the past, and I imagine Þorgeir held his breath for a while afterward, just in case the old gods weren’t so obsolete after all.

We were visiting early in the morning and the road from Akureyri had been almost completely free of traffic, so I was astounded by the crowd which had already gathered at Goðafoss. There were two big buses and at least ten other cars in the parking lot. The crowd definitely detracted from the experience, especially since a surprising number of them were misbehaving. I saw three different people throw their cigarette butts into the falls. Unbelievable!

To help mitigate my rage, I told myself that they must have a reason for the cigarette-tossing. Maybe they’re giving up smoking! Maybe they’re following the example of old Þorgeir, when he embraced Christianity, and instead of casting off their obsolete pagan idols, they’re throwing away their final cigarettes. A fantasy, I know, but it did help lessen my anger. A little. 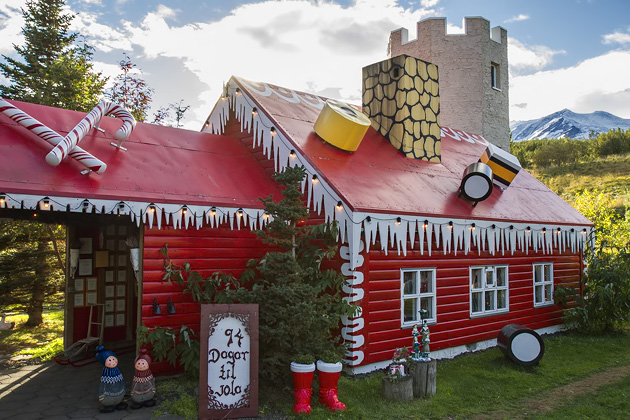 It's Always Christmas in Akureyri

October 8, 2013
Goðafoss - The Waterfall of the Gods Goðafoss, the Waterfall of the Gods, is found just off the ring road near Akureyri. Although this makes it an easy stop for tour buses, don't let the threat of crowds keep you away from one of northern Iceland's most impressive natural sights.
Michael Powell
For 91 Days