With schools of herring and abundant plankton, the freezing waters of the Northern Atlantic have always been prime whale territory. In years past, that meant excellent hunting. And though there’s still a little killing going on, today the most common way to shoot whales in Iceland is with a camera.

Whale watching tours are offered in Reykjavík and other towns along the coast, but we held off until arriving in Húsavík, which is considered the best spot in Iceland. It was mid-September, a little late in the season, but the whales hadn’t yet migrated south for the winter.

After days of rain and snow, the weather had cleared up completely, and we were in high spirits while boarding an oak boat operated by North Sailing. We crawled into extra-warm sailing suits, and set off for the mouth of the Skjálfandi Bay, where a group of humpback whales had been seen earlier in the day.

Soon we spotted the first water spouts. The humpbacks weren’t far off, but by the time we came near, they had dived for food and wouldn’t resurface for awhile. Much of our three-hour tour was spent in this frustrating game of chase, but we got lucky twice, when whales resurfaced right next to our boat. The first time, I was taken totally off-guard by the massive beast which had suddenly popped up just meters away. She didn’t seem all that concerned about our boat… perhaps because she was nearly as big as it.

The tour lasted for three hours, and we must have seen at least a dozen separate whales. All humpbacks, but it’s also possible to see sperm whales, blue whales and even killer whales during excursions from Húsavík. This is an essential Iceland experience, and relatively inexpensive, considering the length of the tour and the likelihood of success.

Another essential Húsavík experience is offered by the incredible Whale Museum, found at the harbor. This massive former whaling station has turned its focus from slaughtering whales to educating the public about them, and it does a fantastic job. With skeletons from various species, including an enormous sperm whale, movies and hands-on exhibits, this is the kind of place in which you could spend hours.

Location of Húsavík on our Map
North Sailing – Website

–We stayed in this hotel in Húsavík

Goðafoss - The Waterfall of the Gods 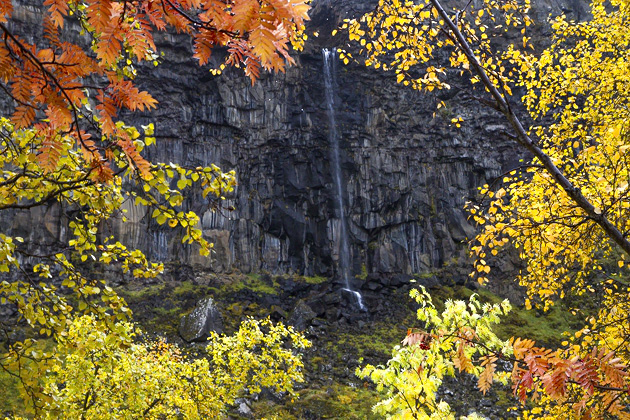 October 14, 2013
Whale Watching in Húsavík With schools of herring and abundant plankton, the freezing waters of the Northern Atlantic have always been prime whale territory. In years past, that meant excellent hunting. And though there's still a little killing going on, today the most common way to shoot whales in Iceland is with a camera.
Michael Powell
For 91 Days