Our first excursion out of Reykjavík was a day trip to the Jökulsárlón Glacier Lagoon on the country’s southeast coast. With its powder blue icebergs floating, bobbing and flipping atop the water’s surface, Jökulsárlón has become one of Iceland’s most famous sights. Justifiably so.

Our trip to Jökulsárlón was organized by Iceland Guided Tours, a company based in the heart of Reykjavík which concentrates on the southern coast and the capital area. The drive out to the lagoon was long, about five hours, so it was nice to be traveling with a knowledgeable guide who could point out geographical features along the way and answer any questions we had.

Jökulsárlón’s icebergs are supplied by the Breiðamerkurjökull Glacier, which looks unfathomably huge looming behind the lagoon, but is actually just a small part of the much larger Vatnajökull Glacier. Although it’s been retreating since the late 19th century, Vatnajökull still covers 8% of Iceland and is Europe’s largest glacier.

As Breiðamerkurjökull shrinks, giant chunks of ice break off and tumble down into Jökulsárlón, where they float listlessly about the water’s surface. By a quirk of nature, the icebergs don’t melt, nor does the lagoon freeze over. This is because a natural river connecting Jökulsárlón to the Atlantic creates a mixture of salt and fresh water; cool enough to keep the ice mostly intact, but salty enough to prevent the water from freezing. Eventually, the icebergs do melt away, but the process can take years.

The view of the lagoon is spectacular from the coast, but a reasonably-priced boat tour can provide a close-up look. The icebergs come in a variety of styles, from white streaked with charcoal-black soot, to crystal-clear formations resembling glass, to gorgeous chunks of powder-blue. The colors vary in accordance with the age of the ice, and where on the glacier it originated. The most dazzling are those formed of the densest, oldest ice; blue is the only color in the spectrum which water doesn’t absorb, which means that the most compressed ice has the bluest hue.

A completely unique location, Jökulsárlón has proven irresistible to filmmakers, appearing in movies like Tomb Raider and Batman Begins. Most spectacular was its appearance in Die Another Day, the otherwise awful 2002 Bond flick. At an enormous expense, and for less than a minute of footage, the filmmakers blocked off the river for months, preventing salt water from reaching the lagoon which caused it to freeze over.

Across from Jökulsárlón, where the river empties into the ocean, there’s a black-sand beach which is also worth a look. Here, some smaller ice chunks have floated down the river and come to rest on the sand. Also nearby, though only accessible with your own transportation, is a second glacial lagoon called Fjallsarlón. It’s less colorful than Jökulsarlon, and lacking access to the ocean, but the glacial flow behind it is even more dramatic.

If you’d like to visit Jökulsárlón, either rent a car or get in touch with the guys at Iceland Guided Tours. It’s a long trip from the capital, but worth the effort. In a country full of unbelievable scenery, this lagoon is among the top highlights.

–On A Budget? Stay At These Hostels In Iceland

The tours are on duck boats which splash into the water.

During the tour, you can sample some 1000-year-old glacier ice.

Fjallsárlón is less colorful, but fed by a dramatic glacial flow. 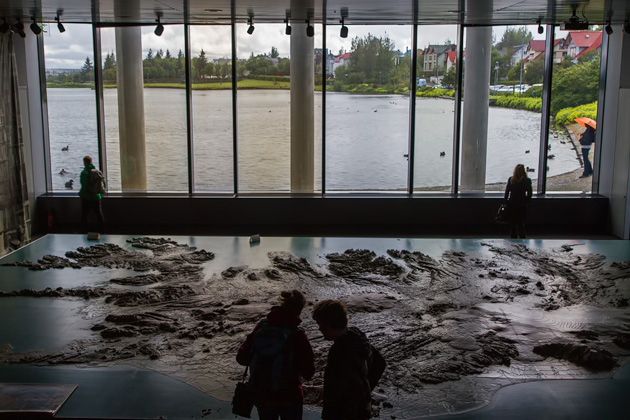 October 11, 2013
Jökulsárlón: The Glacial Lagoon Our first excursion out of Reykjavík was a day trip to the Jökulsárlón Glacier Lagoon on the country's southeast coast. With its powder blue icebergs floating, bobbing and flipping atop the water's surface, Jökulsárlón has become one of Iceland's most famous sights. Justifiably so.
Michael Powell
For 91 Days